Christmas Eve at The 4th Horseman

These photos were taken Tuesday, Christmas Eve 2019, at The 4th Horseman in Long Beach. The 4th Horseman is a pizza and beer bar that opened in November of 2018; they specialize in craft beer, fine wine, and apocalyptic pizza. The primary reason it is even on my radar is that two of the four founders are Martin Svab and Ryan Hughes, previously of Carson’s Phantom Carriage Brewery. The other two founders are Jeremy Schott of The Dark Art Emporium, and Chef Adam Schmalz who helped open Gabi James in Redondo Beach and used to run the kitchen at Phantom Carriage.

While The 4th Horseman has been open for a little more than a year, this was my first visit. While I am not really a pizza guy, I could not help but notice the accolades they have been receiving in the press over the last several months, as well as some amazing photos I have seen friends post on Facebook and Instagram. When The 4th Horseman first opened, they did not open until 4:00 PM and driving to Long Beach from the South Bay at that hour just didn’t make sense. Well, they now open at 11:00 AM, and since they were having a Christmas Eve special going on I headed out, confident traffic would not be an issue.

As I stood outside photographing the nondescript facade, I could not help but notice the aroma emanating from inside; even to a guy that isn’t a particular fan of pizza, it smelled great. As soon as I walked in the door it was pretty obvious by the decor that Svab had been involved in the decorating; it resembled Phantom Carriage slightly. Now, to be fair, I was not familiar with Jeremy Schott and after reading a little about him I am pretty sure he had a lot to say about the decor as well. In the foyer, you are greeted by a pinball machine, some old-school video arcade games, and horror film movie posters.

Once I stepped inside the 2,000 square foot room it was a like walking into a room decorated with stuff that looked like it came from a swap meet or garage sale. There were trophy animals, more movie posters, old beer signs, and creepy looking dolls all over the place. I spent the first few minutes walking around taking photos (don’t miss the bathroom). I had to chuckle when Hughes suggested they could close the front door to cut down on the light coming in from the open front door. I had to remind her that Phantom Carriage was one of the most difficult breweries I have photographed due to how dark it is; the natural light was a welcome addition as a photographer, but I get the impression The 4th Horseman really shines after dark.

After grabbing some photos I headed over to the tap list, which may only have 12 taps, but it is very diverse, with several brews from Belgium, a couple IPAs, and a range of brews from gose to stout, with probably the most surprising (to me) being Miller High Life. Apparently they sell a lot of Miller and are the largest Miller account in the area.

For those that cannot find something on tap that they like, The 4th Horseman also has upwards of 70 different beers available in cans and bottles with several local breweries represented as well as more Miller High Life and Mickey’s Big Mouth! Packaged beers are also available to take home with you.

While I may not be a pizza guy, I am not an idiot, so when a slice of their Slasher (aka pepperoni) pizza was placed in front of me, I took full advantage of it. If you are like me, when it comes to pizza dipping sauces you are probably limited to ranch, garlic, and marinara; if you visit The 4th Horseman and like it spicy, you must try out their Apocalyptic Hot Sauce, made with habanero, pineapple, and mango. It is outstanding.

For those not into pizza, The 4th Horseman is more than pizza and beer as I also noticed they sell meatballs, spinach and artichoke dip, Brussels sprouts, various salads, and at least one pasta dish. Since they now open at 11:00 AM they also have a brunch menu.

The 4th Horseman is located at 121 W 4th Street in Long Beach; they open at 11:00 AM seven days a week and they deliver. Unfortunately (for some), they are not kid friendly; you must be 21 to enter. Cheers!

Back to Photos from The 4th Horseman
[Show as slideshow] 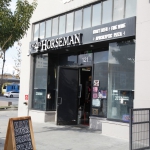 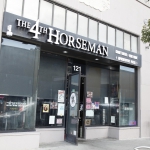 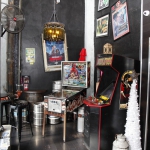 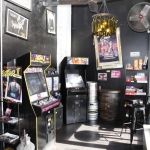 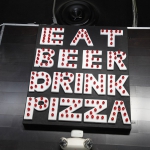 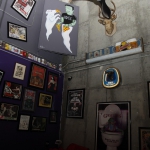 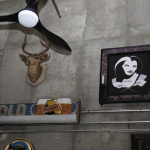 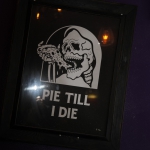 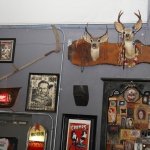 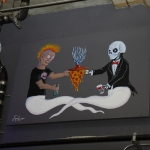 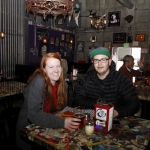 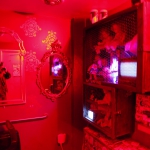 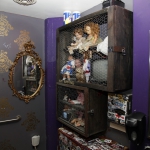 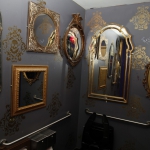 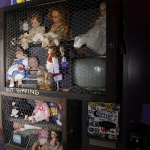 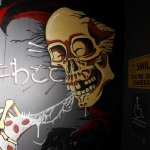 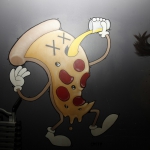 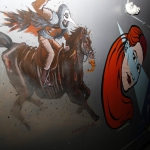 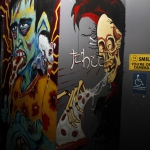 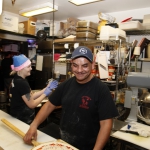