At the beginning of November I had to go to Sparks, Nevada to bury a friend; since I would be driving up CA-395 I knew there would be several breweries along the way that I had yet to try or visit. I decided to leave a day early and visit as many as possible; George would have wanted it that way.

The Indian Wells Brewing tasting room is a pretty interesting place; in fact, I will go so far as to say it may be the most unusual brewery I have ever visited. I walked around a few minutes in what seemed to be a cross between a gift store at a ghost town and a Cracker Barrel with a small museum thrown in just because. With all the soda pop for sale, I had to confirm that yes; they do brew all their beer in-house.

The Indian Wells location was originally known as being where the spring that saved the Manly-Jayhawker party in 1849, during the California gold rush, was located. A wagon train was lost in Death Valley and guides eventually saved them with the water from Indian Wells Spring. Today that water is used to brew their beer.

On the Sunday of my visit they had 11 brews to choose from, so I set myself up with a flight consisting of Orange Blossom Amber, Death Valley Pale Ale, Amnesia IPA, Blackout Stout, and Triple Amnesia IPA. Not being completely unfamiliar with Indian Wells, I was not expecting knock my socks off brews, those expectations were met. To be honest, I have always enjoyed their barrel aged beers the most, so I picked up a couple bottles to go.

Indian Wells Brewing Company is located at 2565 CA-14 in Inyokern; they are open seven days a week, and offer bottles and growlers to go. They have a spacious dog friendly area and there is a restaurant across the parking lot from the tasting room.

About two hours north of Indian Wells is the town of Bishop, where I found Mountain Rambler Brewery, a brewpub. I found Mountain Rambler Brewery when I asked for recommendations on my Facebook page; the suggestion I got was “the brewery on the right hand side of the highway, in Bishop.” Bishop is small enough that those directions sufficed; as it is the only brewery in Bishop, it was pretty easy to figure out and find.

Mountain Rambler opened in February of 2015 and on the date of my visit had 10 beers to choose from; I made up a flight consisting of something I rarely do, all IPAs. They were Picture Puzzle Session IPA, Acrodectes IPA, Phainopepla Black IPA, and Inconsolable Double IPA. All four were pretty solid, but the Phainopepla Black IPA was definitely my favorite.

Their kitchen has a typical brewpub menu with salads, burgers, pizza and sandwiches; since I had another 50 miles to go before it got dark I passed on food. Instead, I took my flight out on the dog friendly patio to enjoy the sunny, if slightly chilly, late afternoon.

Mountain Rambler Brewery is located at 186 S Main Street in Bishop. They are open seven days a week and have a small, dog friendly patio.

After another hour of driving through some very scenic landscape I came upon the town of Mammoth Lakes and Black Doubt Brewing Company, a nano-brewery that is almost two years old.

Tucked away amidst offices and stores, on the outside of a mall, Black Doubt is very much a nano-brewery with its 3.5 bbl brew house, and tasting room that is about the same size, it is small and cozy; which was a good thing as the temperature was dropping as fast as the sun was.

They offered eight beers that night, and I created a flight made up of Heartless Berliner Weisse, Day Craze Blonde Ale, Hopduction IPA, and Cheti Yarmer Double IPA. They may specialize in specialize in Belgian-style ales, sour beers, and barrel-aged brews, but their IPAs were both outstanding.

Black Doubt Brewing Company is located at the Sierra Center Mall, 452 Old Mammoth Road in Mammoth Lakes. The tasting room is open 2:30-9:00 PM Wednesday through Monday; they sell growlers and crowlers to go and the tasting room is dog friendly.

While I had intended to go another 25 miles, Daylight Savings Time just ended and it gets dark early in the mountains; besides, it was going to be easy to find a room in Mammoth Lakes and there was one more brewery there for me to visit, Mammoth Brewing Company.

Mammoth Brewing Company has been brewing since 1995, which probably explains why they were the brewery I was most familiar with, having first tried some of their brews at bottle shares, but most recently some of their beer can be found at local retail outlets.

The Mammoth Brewing tasting room is huge, as I was there a couple weeks before snow season starts it seemed rather cavernous, but I am sure that as soon as the snow lifts start working, that all changes.

They had about 14 beers to choose from, my flight was made up of their Yosemite Pale Ale, Double Nut Brown, Noble Trout kolsch, Wild Sierra session saison, and Alpen Glowconut Imperial Porter. Wild Sierra and Glowconut were my favorites.

Luckily, Mammoth Brewing now has The Eatery By Bleu in their tasting room, so I was able to grab some food. I got the Shrimp Po Boy which was outstanding; it is served as a sandwich, but ask for a fork and knife, it will be easier.

Mammoth Brewing Company is located at 18 Lake Mary Road in Mammoth Lakes. They are open seven days a week and offer growlers and bottles to go. Cheers!

Return to Photos of Breweries of CA-395
[Show as slideshow] 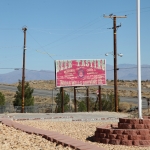 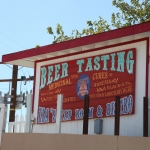 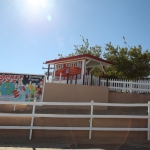 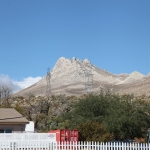 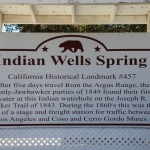 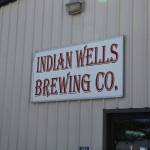 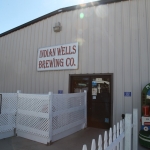 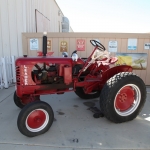 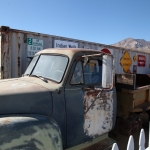 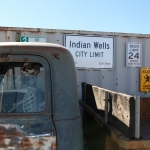 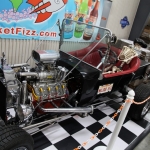 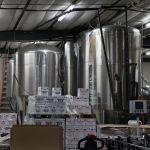 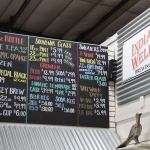 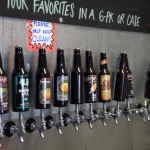 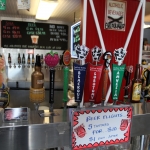 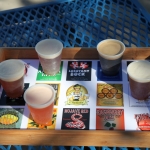 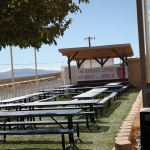 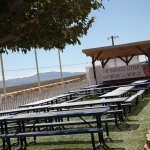 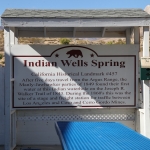 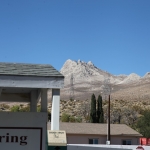