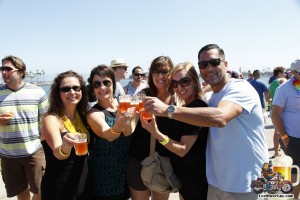 BeerFest for BeerGeeks will be held over the course of one three hour-long session running from 1:00 PM to 4:00. You can purchase tickets online for $60.00 each or you can take your chance and try to buy tickets at the door for $70.00 each. You should probably know that they are only selling 200 tickets, so there is a good chance that they will sell out. Save yourself $10 and ensure your entry by buying your tickets today. UPDATE: USE PROMO CODE ‘stoutpromo’ AND SAVE 33%! JUST $40 PER TICKET.

Ticket holders will receive unlimited two ounce pours, a souvenir glass and appetizer type foods. I talked to the organizers about the glassware and due to time constraints the souvenir glasses are 16 ounce glasses, so those two ounce pours are probably going to be generous, so pace yourself; there are going to be some very high ABV brews being poured. I will be attending the first session, so if you see me say hello and smile for the camera. Stout Burgers & Beers is located at 11262 Ventura Boulevard in Studio City, CA. Cheers.