Last week I was invited to participate in a beer tasting put on by Craft Beer Guild Distributing and hosted by STACKED: Food Well Built in Cerritos. I know that I frequently discuss location when it comes to the invitations I choose to accept and Cerritos isn’t exactly next door, it is a little less than 20 miles from my home, but since Craft Beer Guild Distributing has been on my radar lately I thought we would go ahead and deal with the traffic on the 91. We went last night and in retrospect, I am glad we did.

While I do not usually discuss food on this site, STACKED is different than most gastropubs that I visit. The primary difference is that while the menu is made up primarily of burgers, sandwiches, pizzas and salads, the customer is the one that designs the meal. Virtually every item on the food menu is “build your own.” The brainchild of STACKED co-founder and CEO Paul Montenko, STACKED provides every table with an iPad and a menu that allows you to drop and drag the items you want on your burger or pizza. While Burger King may have been the first to let you “hold the pickles, hold the lettuce” STACKED takes it further by not charging you for the pickles or lettuce you did not ask for and letting you add any of 18 toppings including pastrami, pulled pork or caramelized onions. They have six bun options (one of which is no bun), six cheese options and even eight different types of meat for your patty. After creating your meal you simply hit submit and a few minutes later you start receiving your order. One of the nice things about this is that you can order your drinks, they have a full bar, and have that delivered while you peruse the menu. If you want an appetizer before your meal, order it up on the iPad and it will show up before the main course. It really is pretty cool.

A couple last words on the food: Candied Bacon. Man, oh man, that is some good stuff. As usual, since Tanya and I typically split meals I let her build our burger which brought up another issue: eyes and their relationships to stomachs. It is really easy to build a burger that is bigger than you will ever fit in your mouth. A gentleman at the table next to us did just that; I suspect that after you have been there a couple times you should be able to figure out how to make the perfect burger for yourself. Tanya really enjoys Mac ‘n’ Cheese so she ordered a basic one to check it out; I have to admit it was pretty tasty.

STACKED has four locations, Cerritos, Thousand Oaks, San Diego and Torrance and according to Paul Montenko they are all the same in concept; they just look different. This means that all locations have 16 taps to go along with their full bar. Montenko explained that they typically have 10 taps for their standard brews and six rotating taps. He indicated that they do try to ensure there are local taps available and I guess that is where Craft Beer Guild Distributing comes into play. The tap list last night included Dogfish Head 90 Minute IPA, Knee Deep Citra Extra Pale Ale and Sculpin IPA along with beers from Figueroa Mountain, Oskar Blues and several brews from Stone Brewing and Bell’s Brewery. Todd Marr, from Craft Beer Guild Distributing, brought additional bottled samples from a few of their accounts including J.K.’s Scrumpy, El Segundo Brewing, Bell’s, Figueroa Mountain and Drake’s.

While we had a great time, I have my doubts that I would go out to Cerritos just to have dinner; however, if I am ever stuck in traffic on the 91 I would not hesitate to get off at Pioneer and grab a snack, dinner, or a craft beer. If you have kids with you, this is a great stop for them as well. I do not get a lot of opportunity to use the phrase “family fun” often, but with burger, pizzas and great shakes you do not have to be a beer fan to enjoy STACKED; although it doesn’t hurt.

Back to Photos of STACKED Cerritos
[Show as slideshow] 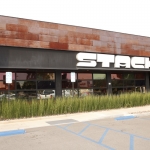 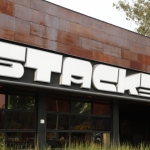 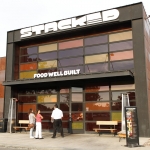 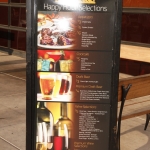 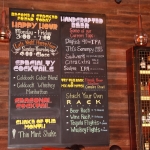 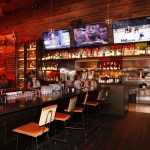 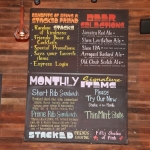 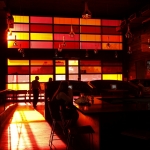 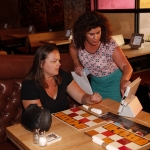 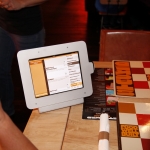 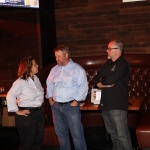 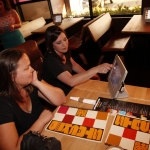 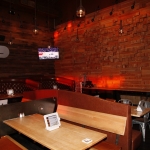 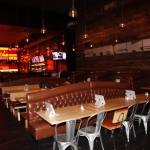 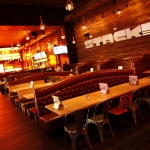 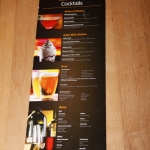 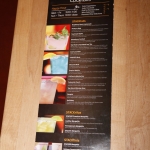 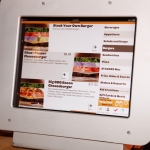 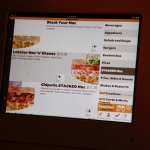 1 2 ►
Back to Photos of STACKED Cerritos