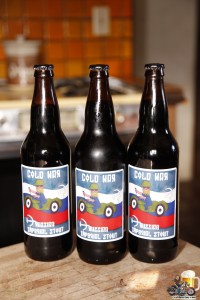 Hopefully you recall that back in August I went to Zymurgy Brew Works & Tasting Room to brew my Cold War Russian Imperial Stout. After a few weeks of fermenting Zymurgy Brew Works founder, Bill Baker, contacted me to let me know that the beer had been bottled and all they were waiting for was the design for my label. I was afraid this might present a problem as I have zero artistic skills beyond the camera and my resident designer and I had just parted ways.

I put it out on my Facebook page that I was looking for someone to design a logo for the beer and it was not long before I heard back from Kim and Brian who have been Craft Beer Guy supporters for quite a while; and coincidentally, Brian is the best friend of one of my brothers. Kim and Brian have a son that has a girlfriend, Brittany, that is a designer and I was told that she would be come up with a label for me. I offered no advice as to what I was looking for, just the name of the beer. You can see the results in the accompanying photos.

Since Brittany is not quite 18 years of age, I was pretty interested in how she arrived at her design; primarily because I think the Cold War of 2016 is significantly different than the Cold War of 1966, so I had to ask what her inspiration was. 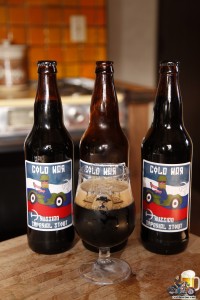 As Brittany put it; when she is presented with a design request for something she is not familiar with she looks to places like Google for keywords, to help get the creative juices flowing. With this particular design, she was given the name of the beer and Kim gave her a little background on me, which would be based on stories her husband may recollect from when he hung out with my brother as a teen.

When she read that it was a Russian Imperial Stout she knew that she would want to incorporate the colors of the Russian flag somehow. When she discovered that motorcycles were important to me, she decided to add her rendition of my riding across the Russian Flag on a motorcycle used in the Cold War. It just seemed natural that she should include the hammer and sickle to express the cold war influence on the design.

While I was not really sure what I was looking for, I really like the end result and everyone that has seen it in person finds the label fun.

So, it came to me that as many homebrewers out there will probably be giving out bottles of their home brew to Christmas presents, custom labels are an inexpensive way to make your homemade gift stand out a little more. If you are better at brewing beer than you are at creating artwork, then you might want to talk to Brittany.

This was her first beer label, but she has designed placards and pamphlets for groups and family events. She has set up an Instagram page for her designs, designsbytbo. She is working on designing a website for her designs along with other social media accounts, and will be posting when each of them launches.

Her prices begin at a very reasonable $30.00; if you are interested in hearing more you can contact her at bakerb.brittany@gmail.com. By the way, the beer turned out great. Cheers!