BeerBoxer – Sounds too good to be true? 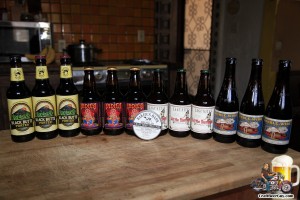 The other day I saw an advertisement for BeerBoxer on Facebook; Beer Boxer is a beer club that will send you “beers you won’t find locally” in “a variety of craft beer styles, including less familiar styles like experimental beers and wild ales, and more well-known styles such as IPAs and stouts.” The advertisement was for a Father’s Day Sale and they were knocking $10 off the standard price; $49.95 for “12 oz bottles and cans” of “12 exceptional craft beers per month” or $69.95 for “6 highly sought-after craft beers” in 750 ml and 22 oz bombers. There were a few reasons I decided to give them a try; the first was that it had free delivery and I have been investigating shipping beer to do some trades so I knew that was not cheap. The $10 coupon sealed the deal, how could I lose? Their website says “BeerBoxer is the best way to get fresh, hard-to-find craft beers.” I decided I would go with the $49.95 “Discovery Box” since they said it “More Variety.” Well, one package had 12 bottles while the other had 6; would that be presumed? Maybe not. I figured this was going to be better than what I could do by walking over to Total Wine.

Today I received my first and last shipment from BeerBoxer; you can see what I got in the photo above. To say that I was a little disappointed would be an understatement. Yes, I got 12 beers, but they consisted of three bottles of four different beers; so much for the variety. As far as the “fresh, hard-to-find craft beers” claim, let’s look a little closer.

I received four different beers; Indica IPA from Lost Coast Brewery, Deschutes’ Black Butte Porter, Little Sumpin’ Sumpin’ from Lagunitas Brewery and a Boulevard Brewery Double-Wide IPA. Hard to find? Maybe if I live in Arkansas, all four are readily available at my local Total Wine store. As far as freshness is concerned the “Best Used By” dates on the bottles that had that had them was October 2013. On the variety aspect I got an ale, an IPA, a DIPA and a porter.

Suddenly my “how can I lose” attitude became, how much did I lose? I went across the street to Total Wine because they allow you to buy individual bottles at a slightly higher price than buying a 6-pack; I figured this would be the fairest way to compare. The Indica IPA is $1.49/each, the Black Butte Porter is $1.99/each. Little Sumpin’ Sumpin’ is $1.99/each and the Double-Wide IPA’s were $2.99/each. If I went to Total Wine I would spend less than $29.00. All I can say is I am really glad I opted for the least expensive option.

To be fair, I did voice my disappointment to BeerBoxer on their Facebook page and Susie Hindle Kher, their marketing and PR person, wrote asking what the problems were. I told her that the primary issues were that I was expecting hard to find beers and three of the four breweries were practically neighbors; and that there was no way I was expecting three bottles of the same beer.

Susie responded that “BeerBoxer was launched from our Seattle facility and, as such, our current box is heavy on West Coast beers. We’re gearing up our Tampa facility for next month’s shipment . . .” She went on to say that they have plans for more customization in the future. As far as the 12 beers question, they “didn’t realize this might not be clear. We’ll change our website to more clearly explain what is coming in the box.” I looked, and now at the bottom of the order page they added “(3 bottles each of four different kinds of beer).” There is no indication how many different beers you get with the Premier Box, but I highly doubt it is six.

Something that really surprised me was there was no requirement to sign for the package or prove my age. I have been in numerous wine clubs and have never had a shipment come to me that the box was not clearly labeled as needing to be signed by someone over the age of 21. I will presume it was an oversight, but oversights like that can be pretty dangerous.

What I had really hoped would be a find that I could not only use, but willingly promote, has turned into anything but that. The talk of multiple facilities and a list of close to 200 featured breweries and me getting a handpicked selection of three local brewers makes me wonder. The fact that the website seems to be about two months old makes me wonder just how much on the website is real and how much is what they hope for in the future. I don’t think I will be sticking around long enough to find out.