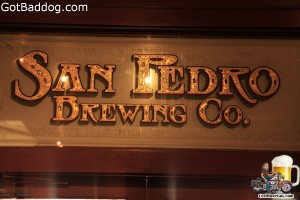 Friday was day 5 of the 8th Annual American Craft Beer Week (ACBW) and I am fortunate enough to have two award winning brewers within a few miles of my home. The first being San Pedro Brewing Company and the other being Smog City Brewing. 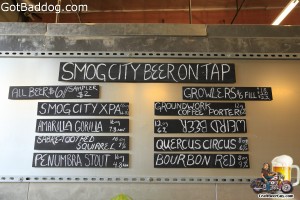 San Pedro Brewing Company (SPBC) is a brewpub that has been at their current location for 13 years. They have won more than 43 medals in local county fairs, commercial beer competitions and international beer festivals. In addition to award winning beers, they have some pretty good food. SPBC gives tours on Friday afternoons, so if in the area, you might want to check it out. I was given a mini-tour and have to admit, I was quite surprised at the quantity and quality of beers they brew with such a small operation. When I was taken downstairs I fully expected to see a massive operation; as you can tell by the photos that was far from being the case.

When I left San Pedro I headed over to Smog City Brewing as they just got their growlers in and I wanted to be among the first on my block to own one. While there I had a Quercus Circus Sour and an Amarilla Gorilla IPA; we picked up a growler of the 2012 Great American Beer Festival gold medal winner, Smog City Groundwork Coffee Porter. Smog City’s grand opening was held on Saturday, so that will be the subject of my ACBW day 6 report. All my photos from day five of American Craft beer Week will be found on GotBaddog.com.