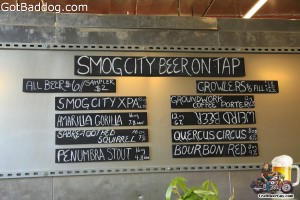 Saturday was day six of the 8th Annual American Craft Beer Week (ACBW) and to be honest, it was a day that I had been waiting for like a kid at Christmas; Smog City Brewing Company finally had their grand opening. It is not like the South Bay is lacking in microbreweries, but Smog City is geographically the closest to me (by about two blocks) and Jon Porter(owner/brewer, goes by Porter) brews the widest variety of beers for miles. On their tap list Saturday, they had Smog City XPA, Groundwork Coffee Porter, Sabre-Toothed Squirrel(Red Ale), Quercus Circus (Sour), Bourbon Red (Barrel Aged), Penumbra Stout, Amarilla Gorilla (IPA) and Weird Beer (Saison). The plan is to eventually have 20 beers available on their taps, so in my opinion, Smog City Brewing is a great addition to the South Bay craft beer scene. Oh, and Porter won a gold at the 2012 Great American Beer Festival for his Groundwork Coffee Porter. 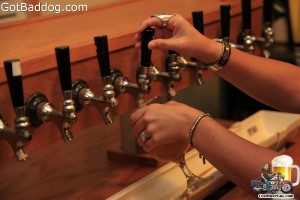 Every party should have 15 taps

After leaving Smog City I headed over to a birthday party for the president of one of the local home brewing clubs, Strand Brewers Club. I felt it appropriate that I include was able to include a home brewers gathering in this celebration of American craft beer. It seems that every biography I read about a respected brewer includes science and/or engineering and being a home brewer. In fact, Porter of Smog City started off as a home brewer and was a member of the Pacific Gravity home brewers club and won many competitions as a home brewer. The host of the Strand Brewers Club party was Rives Borland, the current president, because it was his birthday. A look around Rives living room shows he has several ribbons and plaques from brewing competitions under his belt, so you never know; someday I may be writing about his new brewery, only time will tell.

You can see all the photos from day 6 of the 2013 American Craft Beer Week on GotBaddog.com.