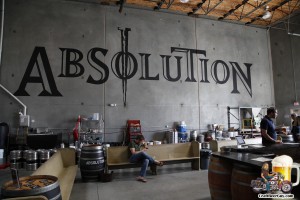 This coming Friday, April 25, 2014, Absolution Brewing Company will have their official grand opening complete with a ribbon cutting ceremony featuring the Mayor of Torrance, the Torrance City Council and the Torrance Chamber of Commerce. In addition to city representatives, Torrance Cable TV and various other news outlets are expected to attend.

“We will also be releasing some special surprise beers which will be paired with gourmet foods prepared by Chef Travis Porter of Creative Eats,” Heath added. “This should be a fun afternoon with fun promos all afternoon.”

Absolution Brewing Company is located at 2878 Columbia Street in Torrance. They will be open from 11:00 AM until 9:00 PM with the ribbon cutting ceremony beginning around 4:00 PM. I hope to see you there. Cheers!