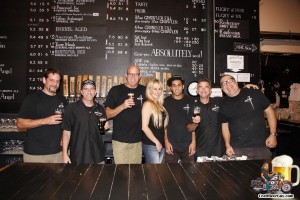 On Wednesday evening, Torrance production brewery Absolution Brewing Company appeared before the Torrance Planning Commission with a request to modify (MOD15-00001) their previously approved Conditional Use Permit (CUP13-00026). Absolution’s request included the ability to be open seven days a week, to have food trucks, hold special events and to have live entertainment. Most of Absolution’s requests were granted; the only one that was not was the request to have live entertainment.

When Absolution Brewing Company appeared before the Planning Commission in November of 2013, the standard operating hours of the existing Torrance tasting rooms were pretty much Thursday through Sunday, with the hours of 4:00-9:00 PM on Thursday and Friday; noon until 9:00 on Saturdays and noon until 6:00 PM on Sundays. When Absolution submitted for their Conditional Use Permit they requested that they be allowed to be open from 3:00 until 9:00 PM on Wednesday and Thursday; 11:00 AM until 9:00 PM on Friday and Saturday and noon until 6:00 PM on Sunday. I remember wondering whether or not Absolution would be able to justify being open that many hours a week; it is one thing to have permission from the city, but it is another to have enough of a demand to make it worthwhile to be open that long. Well, time has proven that they can justify being open on the additional days and some of the other Torrance breweries have followed their lead and are now open on Wednesday’s as well. Recently, Strand Brewing Company and Monkish Brewing Company have appeared before the Planning Commission and were given permission to hold private events on Mondays and Tuesdays; Absolution decided to take it a step further and request that they be allowed to be open on Monday through Thursday from 3:00-10:00 PM; Friday and Saturday 10:00 AM until 10:00 PM and noon until 10:00 PM on Sunday.

Although the Planning Department was not entirely in favor of allowing Absolution the ability to be open on Monday and Tuesday, primarily because it had not been done before in Torrance, after hearing arguments in favor of allowing the extended hours, the Planning Commission allowed the extended hours as requested along with the ability to have food trucks and to hold special events.

As far as the request to have live entertainment at any time, this was denied. Currently, if a brewery in Torrance wants to have live entertainment they must get an event permit, of which you can only have four per year. This was pretty much the same regulation that was in place for having food trucks on-site, but because the City of Torrance has been working with the breweries and the breweries are making sure they only bring in food trucks that are licensed to operate in Torrance the Planning Commission is allowing the breweries to modify their Conditional Use Permits. This provision was denied because many on the Planning Commission feel that this would begin the transformation of tasting rooms into bars, and no one wants that.

It is important to understand that just because the Planning Commission has said it is okay for Absolution to be open seven days a week, this does not mean that Absolution will immediately take advantage of that. In fact, Absolution Brewing Company CEO, Nigel Heath stated that the change would not be immediate. Like I said above, they have to be able to justify being open to themselves.

Torrance will be getting more production breweries; in fact, I will be at another CUP hearing on August 5. As I said to the Planning Commission last night, there is now a “new norm” for the craft breweries in Torrance that wish to open a tasting room. The trail has been blazed; tasting rooms will likely have the ability to be open seven days a week, provide food trucks and hold special events. All the brewery has to do is request it.

Someone asked me if there was a regulation in Torrance that had prevented tasting rooms from being open seven days a week; there never was but that is not really how it works. When a Conditional Use Permit is applied for the business requests certain things including hours of operation. If the brewery requested to be open four days a week and it was granted, they can be open four days a week. It all depends on what is requested; if a brewery asks to be open four days a week and are granted that, they cannot be open seven days because it wasn’t requested. The CUP Modification requests are the way to go about changing it. As it is pretty expensive to have these hearings, it makes sense to ask for what you feel you will need in the future so you do not need to return for a modification. That being said, apparently there is another method for minor changes that is a lot easier to obtain at very little cost, if any. I will try to track that information down.

Anyway, congratulations to Absolution Brewing Company for being granted most of their modification request; you actually did a lot for all the Torrance production breweries, current and future. I am sure they all appreciate it. Cheers!