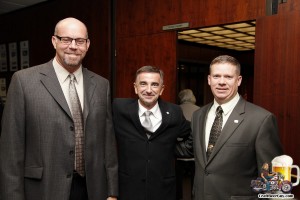 It is official; Absolution Brewing Company, the latest craft brewery to seek out Torrance as their home, appeared before the Torrance Planning Commission on Wednesday evening to request approval of Conditional Use Permit, CUP13-00026 to allow a tasting room in association with their brewery operation located at 2878 Columbia Street. After an initial presentation by Absolution Brewing Company CEO, Nigel Heath and head brewer, Wes McCann those of us in the audience were able to make our statements of support (yes, I took advantage of the opportunity). After a few minutes of discussion a vote was taken and by unanimous decision, the permit was granted.

Absolution Brewing Company will be open Wednesday through Sunday and have longer hours than any of the other Torrance tasting rooms, so who knows, maybe a pattern will be set and we will start seeing increased hours of operation at the others. They plan on brewing Old World styles of ales from England, Germany and Belgium using New World ingredients, especially the west coast hops that have become so popular around here. We can probably expect them to open by the beginning of 2014. I have been visiting the location over the last several weeks and they are really making progress. I heard a rumor that they may start with test batches very soon.

As I said in my statement to the Planning Commission, this is a great time for a craft beer fan to live in Torrance. Cheers!

One Response to Absolution Brewing granted Conditional Use Permit