A Tour of Beachwood Blendery

Readers may recall that at the beginning of October I was invited to an advanced tasting of Guinness’ new Nitro IPA; while the beer and meal was quite nice, the best part of the evening was meeting a couple Guinness representatives, Keith Dunne and Jonathan Urch who had hosted the event. Dunne came out from St. James’ Gate in Dublin while Urch came out from New York City. By the end of the evening we had formed a pretty good relationship and before I left they informed me that they had one day to explore the LA craft beer scene and asked what breweries were a “must” to visit before they left. While we have several breweries that could fall under that category, one that really stands out is Beachwood Brewing & BBQ; after all, they won gold in 2013 and 2014 for Best Mid-Size and Best Large Brewpub at GABF. When I suggested Beachwood and told them of some of the awards they had received it was decided that we would meet at Beachwood BBQ & Brewing the next day. Dunne mentioned that it would be great if he could meet the owners and I said I would do my best.

I reached out to Beachwood’s Creative/Marketing Manager, Aaron Carroll and was informed that co-owner/head brewer Julian Shrago was out of town and the other co-owner, Gabe Gordon might be at the Seal Beach location but he would do what he could.

The next day we all met at Beachwood and the Guinness reps loved everything they tried. During our tastings Carroll joined us at our table and informed us that Gordon would not be available, however, he did invite us to tour the new Beachwood Blendery. They jumped on the opportunity.

As we walked through the alley to the back entrance I could not help but notice, and comment, that this was the best smelling alley I had ever walked through. Heck, I would be willing to set up camp in that alley it smelled so good. When Carroll open the door to the Blendery the source of these delicious aromas came into our view.

I had been given a preview of the Blendery seven months prior and that was a totally different experience. During my first visit there were about 100 barrels with only 16 of them having anything in them. While I could definitely see the potential for what Beachwood was doing I recall my first impression being that the room was chilly. Of course, Beachwood was still dialing things in at the time. When we visited a couple weeks there were hundreds of barrels stacked with most of them full of beer; and it smelled amazing.

While I was allowed to photograph everything, Carroll asked me to refrain from posting the photos until an upcoming press release had gone out. Well, the press release went out today and I am happy to show you my photos and announce that the Beachwood Blendery will become open to the public on November 1, 2015 at 11:00 AM; they will stay open until 6:00 PM unless they run out of beer first.

Since the beers at Beachwood Blendery are created in small batches they won’t always know how long they will take to mature; after all, one does not rush perfection. The fact of the matter is that they can’t rush it as sours and lambics are not like IPAs that can be fairly well predicted as to when they will be ready. As such, these first batches are part of the “Propagation Series” with the first two being named appropriately, Propagation Series 001 and Propagation Series 002. As you might guess, subsequent batches will be named 003, 004, etc. As I recall, some batches may jump from say 004 to 010, but I do not recall the details; I know there was a reason.

The Propagation Series of beers will showcase the flavors imparted by the various strains of bacteria and yeast used. 001 is a Petite Saison Ale with Brettanomyces; there will be 900 bottles made available with a limit of three per customer. 002 is a Berliner Weisse with Lactobacillus and Brettanomyces; there will be 1,250 bottles released with a limit of three bottles per customer. Both of these will be available on draught at the Blendery as long as it lasts.

Since these brews are on their own schedule, Beachwood Blendery’s hours will be off and on. After 001 and 002 are gone, they will be closed until probably December when the next batches are ready to try. You should follow their website, Instagram or Twitter for updates.

Back to Tour of Beachwood Blendery Photos
[Show as slideshow] 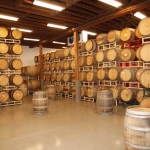 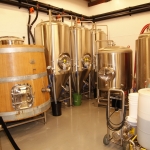 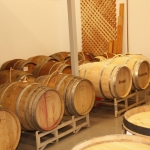 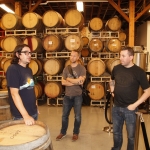 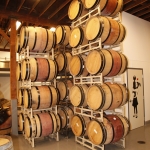 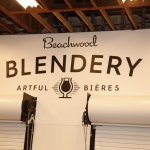 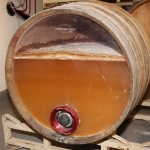 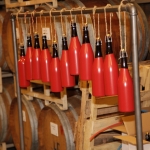 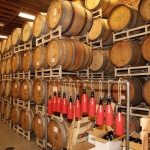 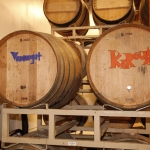 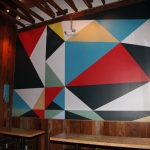 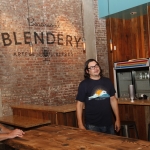 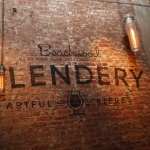 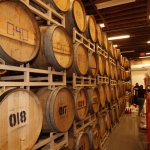 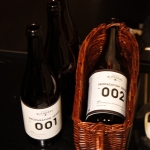 Back to Tour of Beachwood Blendery Photos