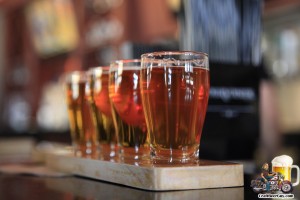 It was a little over three months ago that I first heard about 38 Degrees Ale House and Grill; after all, they are all the way out in Alhambra and I am in the South Bay so there was not a lot of reasons that I had to be aware of them. On one particular evening I happened to be at a beer event in Hermosa Beach and someone I was talking to received a text telling him that there was going to be a Pliny the Younger release party at 38 Degrees in Alhambra. I had heard a lot of rumors by that point, so I called 38 Degrees to confirm the rumor and after talking to co-owner Clay Harding it was decided that I would come out and cover their event.

To be honest, I was not really sure what to expect; I certainly was not expecting what I found there. Looking past the 400 people standing in line to get in, one guy for more than three hours by the time I got there, I was pretty impressed. 38 Degrees Ale House and Grill is huge; it must seat more than 200 people. They offer 38 beers on tap or cask and I do not recall seeing any Budweiser or Miller there. In fact, I was a little disappointed that I had ridden my bike out there because there was a lot to choose from and a designated driver would have been nice. I did not eat, but it seems like everyone around me did. I asked a couple people about the food and they all spoke highly of it. When I left, I knew I would have to return to spend a little more time. 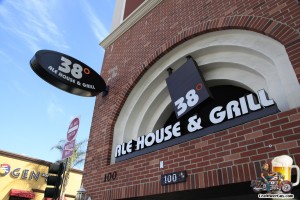 That time has come; on Saturday June 8, 38 Degrees will be holding their 4th Anniversary Celebration beginning at 1:00 PM to “celebrate four years of serving Los Angeles with some of the most delicious and unique craft beers and entrees.” There is no cost of admission; just pay for what you eat or drink. Speaking of drink, 38 Degrees 38 Degrees will be breaking out some very special archived beers; barrel aged beers, sour ales as well as fresh local ales. Their list includes:

If you enjoy craft beer you can see this is an outstanding lineup. If you have a way to get to Alhambra on June 8, I suggest dropping by 38 Degrees for their 4th birthday party, it sounds like it will be a great time. You can make reservations on their website or you can call them at 626-282-2038. Be sure to smile if you see my camera pointing in your general direction. You can see all the photos from the Pliny Release Party on GotBaddog.com