Back in December, El Segundo Brewing Company held their Crude, Cocoa and Donuts Christmas Party along with their Second Annual Ugly Sweater Contest; I happened to take third place, winning a tour and tasting for four. I knew I wanted to use the prize to help promote El Segundo Brewing Company; I just wasn’t sure how I would do it. Ideally, I would be able to bring four people there as first time visitors.

In January Beachwood BBQ & Brewing announced that they were going to hold their 4th Annual Pliny Fights Cancer Charity Raffle and I decided that I would add some incentive for my followers to buy a ticket. All you had to do was take a photo of your ticket(s) and then tag Craft Beer Guy on Facebook or Instagram. Two winners would be chosen and each could bring a guest. On the day that Beachwood held their raffle I utilized an online number randomizer and picked the winners to my contest. The winners were Jessica Casey of Long Beach Hopheads and Dan Parker, a homebrewer and member of the Strand Brewers Club.

These photos are of the tasting and tour that we were given last night by El Segundo Brewing Company taproom manager, Pete Crowner. As luck would have it, Jessica and her husband, while somewhat familiar with El Segundo’s beer, had never visited the tasting room before. Dan had been there once before, briefly, so I was pleased that I was able to introduce new faces to the tasting room.

Dan was kind enough to bring bottles of his home brewed IPA for Jessica and me; and Jessica brought a nice growler cozy that Long Beach Hopheads are selling. You can see it in action in the last photo. I was not sure how much use the cozy would get as I don’t really take growlers to events very often but I quickly discovered it makes life easy just transporting your growler to and from the brewery. The long strap makes hands free transportation available. The artwork was done by Long Beach Hopheads member, Glenn Sawada. They still have a few dozen of these cozies available for sale for a mere $11.00. You can get information on obtaining one by joining the Long Beach Hopheads Facebook group (it’s a closed group, you will need to get approved) or you can contact me and I will put you together with Jessica.

Thanks to everyone that participated in my little contest and congratulations to Jessica and Dan. Thank you to El Segundo Brewing Company for the prize package and to Pete Crowner for staying late to give us the tour. Cheers! 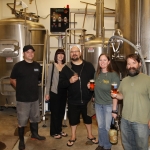 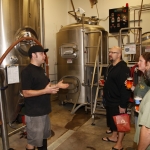 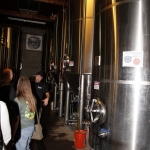 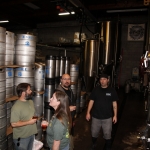 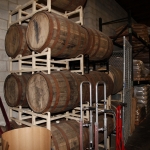 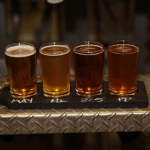 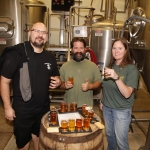 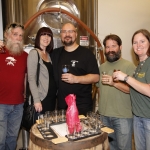 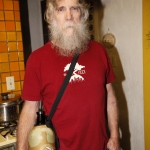 Back to El Segundo Brewing Tour and Tasting Photos