When I left Sparks I had friends to visit and breweries to see, so I headed west on I-80. As there had been snow overnight, it made for a very scenic drive.

My first stop was Auburn Alehouse, which is maybe a block and a half off the interstate in Auburn, California. Auburn Alehouse is a brewpub that has been open since 2007; I tried visiting them back in 2016, but it was the one day they were closed in recent memory. As luck would have it, I got the same primo parking spot this time.

As I got there as soon as they opened, I was able to observe as their patio seemed to fill up quickly with locals enjoying their lunch on a sunny day. While there I ran into former Firestone Walker – Propagator brewer, Ben Maushardt; and former Rob Rubens Brewing & Distilling brewer, Mike Hancock.

As I had other plans as far as food was concerned, I set into creating a flight out of the 12 taps they had available. My flight was made up of Gold Country Pilsner, Rusty Spur Lager, American River Pale Ale, Gold Digger IPA (silver medal winner at GABF), Shanghai Stout, Grave Digger Black IPA, and PU240 Imperial IPA.

While all the beers were solid it should be no secret that the IPAs were the beers I enjoyed the most; luckily, Gold Digger and PU240 were both available in cans.

Auburn Alehouse is located at 289 Washington Street in Auburn and they are open seven days a week. They offer growlers, bottles, and cans to go, and have a dog friendly patio.

My next stop was Nemo Sushi in Rancho Cordova. My friend Song works there and he is my favorite sushi chef anywhere in the world. If I am within 100 miles of Song, I am going to visit him. I have included photos of Song with his girlfriend; he made me a couple hand rolls but I was too busy enjoying them to take photos. Seeing Song is always a good time. If you are in the area, I highly recommend checking them out.

After a short visit and some delicious sushi I set my sights on my next destination, Russian River Brewing Company.

I have only been to Russian River once, well, two times in two days, but it was for the Pliny the Younger release back in 2014, and I don’t think that was really a good way to visit a brewery for the first time. One thing that I had remembered from my short time there was that they had a flight board of 18 beers; from that time it was on my bucket list to tackle that. I was hoping to take care of that during this visit; I contacted my good friend Roland that lives in Sebastopol, and he said he would meet me there.

Unfortunately, by the time I arrived in Santa Rosa, Roland ended up having some business to take care of and would not be available to meet me at Russian River. I suppose if I had arrived a couple hours earlier, I would have been willing to tackle a flight of 18 beers by myself, but as it was after 5:00 and I was still going to have to drive to Sebastopol, I decided on setting up a small flight and got some bottles to go.

Russian River Brewing Company is a brewpub located at 725 4th Street in Santa Rosa; they are open seven days a week except for major holidays like Thanksgiving and Christmas. Russian River Brewing offers growlers and bottles to go. Sampling their flight board remains on my bucket list; maybe next time.

After finishing up at Russian River I headed down to Sebastopol where I would be spending the night.

After arriving in Sebastopol and catching up with Roland for a bit, he mentioned that there was a new production brewery in town; he did not know the name of the place, just where it was, so off we went.

The brewery was Crooked Goat Brewing, and while their sign suggests they have been open since 2013, they were still brewing out of a garage back then. Apparently they did pretty well as they seemed to consistently win awards. In August of 2016 they opened their location in Sebastopol.

Utilizing a 10 bbl brewhouse, Crooked Goat usually has 16 beers available, and they have a flight tray that will hold all 16, although only 15 beers were available on the night of our visit. Since I had Roland with me, we went for it.

It was a fun experience for me as Roland is not as versed in craft beer as many of you are, and I think he was surprised to find so many varied flavors available in that beverage he simply knows as beer. The raspberry in the First Crush pale wheat ale was outstanding; the apricot in the Foggy Notion NEIPA was unlike any NEIPA I have tried to date. The Silver Lining stout was delicious with its subtle Madagascar vanilla bean flavor. For a young brewery, they are doing some very tasty brews. I look forward to my next visit there.

Crooked Goat Brewing is located at 120 Morris Street in Sebastopol. They are open seven days a week and have a dog friendly tasting room. Crooked Goat offers crowlers to go. Cheers!

Back to Photos from Auburn Alehouse, Russian River Brewing and Crooked Goat Brewing
[Show as slideshow] 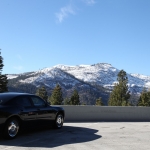 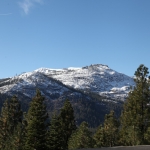 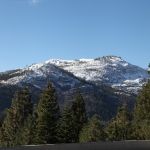 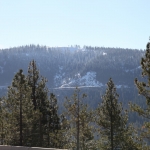 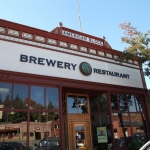 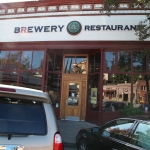 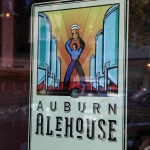 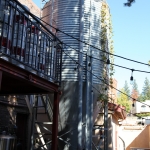 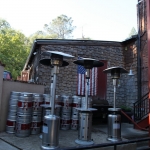 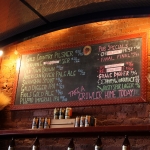 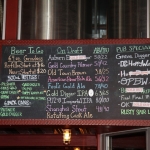 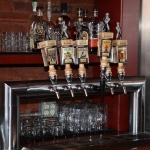 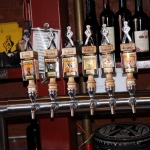 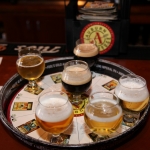 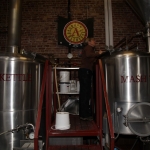 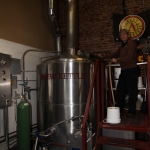 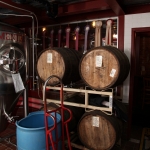 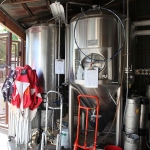 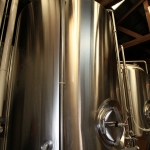 1 2 ►
Back to Photos from Auburn Alehouse, Russian River Brewing and Crooked Goat Brewing