Lots Brewing in the Pomona Valley

Two weeks ago I was out in Covina visiting REV Brewing and Alosta Brewing companies and during my conversations with the owners of both breweries a common thought was made; there is no love shown for the breweries on the east side of town. What they were talking about was not about acceptance by the local community, but rather they did not see things like stories about their breweries and the beers tours that have become so prevalent on the west side of Los Angeles County never come out there. As I pressed for more information a couple breweries I was unfamiliar with were mentioned at both locations; Rök House Brewing Company and Dale Bros. Brewery, both located in Upland. Since Claremont Craft Ales was in the vicinity and I had not been there in over 18 months, I decided to stop by there as well. I had an event to photograph in Irwindale on Sunday evening so I decided to head out to the Pomona Valley early and make a day of it.

You should not feel too bad if you are unfamiliar with Rok House Brewery as they have only been open for six or seven months. Brewing with a 6 Bbl brew house, Rok House offered 10 different options from their taps ranging from their Kiska Blond Kölsch and Battle’s End Orange Wit to their Eric the Red Ale and Midnight Sun Black IPA with a couple IPAs, porters and brown ales for good measure.

A “Rök House” was the stone structures that Vikings brewed their beers in and co-owner/brewmeister Lars Bennett has Norse heritage so together with co-owner/brewmeister Mark Heffernan they took on the Icelandic/Norse/Viking theme in both decor and names for their tasty brews.

While this is a young brewery they have begun a barrel aging program and hope to be canning or bottling as soon as they get a larger fermenter so they can hit the minimum required to have a mobile canning unit come out. In the meantime, growlers are available for takeout and their beers can be found at a couple locations in the Upland/Claremont area. Rok House Brewery is located at 1939 W. 11th Street in Upland and is open Thursday through Sunday.

A little more than a half mile from Rok House is Dale Bros. Brewery. Dale Bros. has been open almost 12 years; in fact their 12 year anniversary celebration is scheduled for the last weekend of January. On the day of our visit the Dale Bros. tap list featured 12 brews with several lagers, a couple IPAs, a porter, a stout, a sour and barleywine being among the choices available.

It is no secret that I am a hophead but I found myself leaning towards their California Black Beer, a black lager, and their Hopped Upland: Red Between the Lines, red ale. Well, that was until they brought out a taster of their 2013 Bourbon Barrel Aged Winter Haze barleywine; it was a definite highlight of the visit.

Dale Bros. Brewery is located at 2120 Porterfield Way in Upland and is open from Tuesday through Sunday from 12:00 – 9:00 PM. They offer 22 oz bombers as well as 32 and 64 oz growlers and 5, 13.2 and 15.5 gallon kegs available to go. The MESquite BBQ mobile smoker will be there on Sundays for the foreseeable future.

The most noticeable difference would be the number of beers they had available. On the date of my first visit they only had six taps available, and one of them was tapped out. When I returned yesterday they had 18 taps, with only one tapped out. The next difference was the size of the current brewhouse compared to what they were brewing with in 2013. In fact, some of the equipment they outgrew is now being used at Rok House Brewing. Naturally, with all that new beer they needed more space to house the equipment and to give their customers somewhere to sit and enjoy their brews. To accomplish that they knocked down a wall and pretty much doubled their available space.

Since it was my third stop, and I had time constraints, I had one flight made up of their Carlisle Pale Ale, Jacaranda IPA, Red IPA, Del the Extra IPA, 2nd Anniversary Blonde Ale and Double Dude Double IPA. Tanya spotted the Royal, a barrel-aged Imperial Oatmeal Stout and was immediately won over. She said it was her favorite beer of the day; personally, I had no regrets with any of the choices I made and thought the 2nd Anniversary was the best tasting blonde ale I have ever had.

Claremont Craft Ales is located at 1420 N. Claremont Boulevard in Claremont and is open Wednesday through Sunday. They have 32 and 64 oz growlers available to go as well as some canned options. While I usually find a beer or two at most tasting rooms that I may not care for, I cannot say the same about Claremont; it seems everything they brew is a hit. Cheers!

Back to Photos of Pomona Valley Breweries
[Show as slideshow] 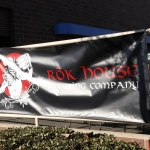 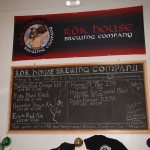 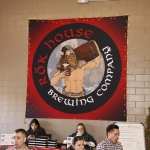 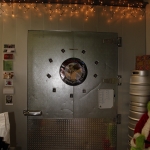 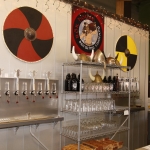 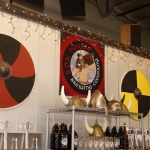 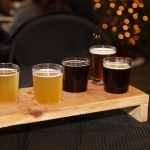 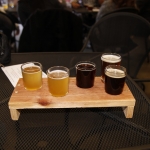 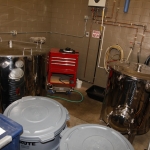 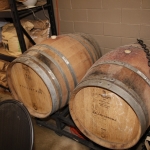 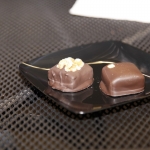 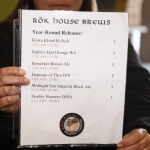 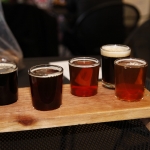 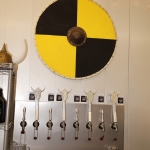 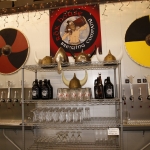 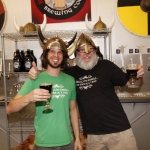 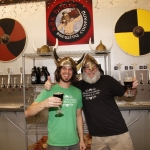 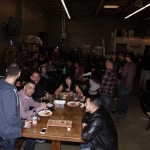 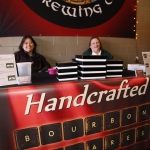 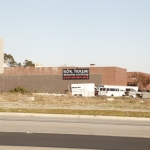