Local craft brewers give back to the community 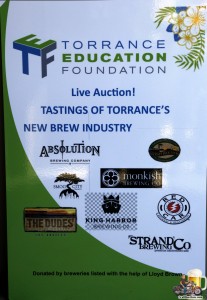 It was Saturday morning, March 1 when I received a text from Torrance City Councilman Pat Furey with a simple question; would the Torrance breweries be interested in donating items for the Torrance Education Foundation (TEF) fund raising event? Furey’s idea was that if I could get a few donations put together from the various breweries the TEF could put it together as one nice live auction item at their event which was held last Friday, March 28. I told him I would do what I could.

Unfortunately, I was not in town for the event so I have no photos but I am told that the live auction was quite spirited (no pun intended) and the beer package raised $700 for the Torrance Education Foundation. The items included t-shirts, hats, growlers with fills, tasting parties, tours, glassware and several bottles of locally brewed craft beers. It really was a nice package and congratulations to whomever won the auction, you got a nice haul there. Thanks again to Laurie Porter of Smog City Brewing Company, Henry Nguyen of Monkish Brewing Company, Dale Caughey of LA Craft Beer Tours, Rich Marcello of Strand Brewing Company, Nigel Heath of Absolution Brewing Company, Tom Dunbabin of King Harbor Brewing Company, Gilbert Disloquez of The Dudes’ Brewing Company and Bob Brandt of Red Car Brewery for your contributions to this fundraising event. You make me proud to be part of the South Bay craft beer community. Cheers!

2 Responses to Local craft brewers give back to the community