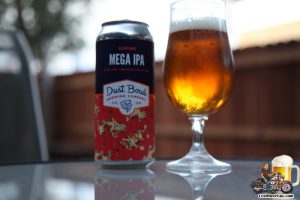 Brewmaster Don Oliver shares his thoughts on this aggressively hopped beer: “We brew a lot of big beers at Dust Bowl. Supine Mega IPA follows in the footsteps of Dump Truck of the Gods Mega IPA, but we push the beer further with a 14.4% alcohol content and a bigger hop load (85 IBU) featuring Apollo, Amarillo, Citra and Mosaic hops.”

Champagne yeast helps bring this massive IPA into the Mega category. Citrus and tropical notes fade to the background behind big notes of stone fruit.

The big beer also makes a bold statement on store shelves featuring an eye-catching blue and orange combo with tigers who are looking a little supine themselves. The design comes from Dust Bowl’s long-time agency, Blind Tiger Design from Seattle, WA. The label carries out the new specialty template that was introduced in 2019 upon the brewery’s 10 year anniversary.

Dust Bowl Brewing Co. is on track to reach Regional Craft Brewery status in 2020. The company has a solid line-up of new specialties and year-round additions to its growing portfolio. Dust Bowl beer is currently available throughout Northern California, most of Southern California, Nevada and Oklahoma with plans underway for additional U.S. distribution and more satellite taprooms.

Dust Bowl Brewing Co. produced its first beer in May 2009. The company is owned by Brett and Karen Tate and Brett and Camy Honoré, who became the Tate’s business partners in 2010. The company built and moved its production to a 30,000 sq. ft. brewery and taproom, located in Turlock, California, in June 2016. Dust Bowl Brewing Co. beers are available in 5.2 and 15.5 gallon kegs along with selected styles in 22 oz. and 12 oz. bottles and 19.2 oz., 16 oz. and 12 oz. cans. Distribution includes Central and Northern California, parts of Southern California, Nevada and Oklahoma. The craft brewery showcases a wide variety of its beers at its two Turlock, California taproom locations, the Brewery Taproom and the Downtown Taproom, and in Monterey, California at its Tap Depot. More information may be found at www.dustbowlbrewing.com. Cheers!