In case you had not heard, Los Angeles County craft breweries no longer require reservations a day in advance, effective this past Friday. What you may not be aware of is that these breweries, and their patrons, have Transplants Brewing to thank for this development. 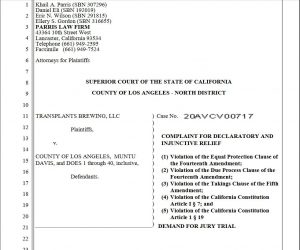 To refresh your collective memories, at the end of May, Los Angeles County allowed breweries to begin reopening under an advanced Stage 2 of the COVID-19 lockdown. Because of a variance granted in June, breweries began setting up their operations to ensure social distancing guidelines as well meeting the obligations of providing food [via food trucks] so they could operate under the same guidelines as restaurants. This was a fair decision that definitely helped local business continue in their attempt to survive the decimation of today’s economy.

Because COVID-19 positive cases began rising, the County decided on June 28 that restaurants’ indoor dine-in services would be closed, but outdoor dining would open and delivery/takeout would be allowed; all bars, breweries, pubs, indoor wineries and tasting rooms were closed for onsite consumption.

On July 12, I tried to get a letter campaign to Governor Newsom, Mayor Garcetti, Supervisor Hahn, and the LA County Health Department going, but for some reason I did not see much support coming from our local breweries.

On July 13, The State of California implemented rules saying breweries could open if they had food; food trucks were sufficient for the breweries that did not have kitchens; this would be superseded by the LA County Health Department that said food trucks would not be allowed.

The last week of August, the LA Brewers Guild launched a week long “Save LA Brewers” letter writing campaign; it was a few weeks later that a couple local breweries were posting on social media that Supervisors Hahn and Barger were visiting some of them. I couldn’t help but notice that Transplants co-owner Corey Cordovano had mentioned Transplants was working with Supervisor Barger’s staff, without any help from the Brewers Guild. After asking some questions, I discovered Transplants Brewing had left the LA Brewers Guild back in June and decided to hire Parris Law Firm to represent them in a lawsuit against the County of Los Angeles.

On September 22, Transplants Brewing, via their attorney, sent a letter to the county, giving them a week to set their rules to align with the State of California. A week later, the county “caved” and decided food trucks would once again be allowed.

On October 6, an order was issued by the County that allowed food trucks, however, customers had to make reservations one day in advance; something that no restaurant, brewpub, or any other business I can think of was required to do. On October 7 the lawsuit was filed on behalf of Transplants Brewing.

On October 21, Parris Law Firm announced that the County of Los Angeles had rescinded the 24 hour requirement; this went into effect Friday, October 23.

Our next step is probably to eliminate the food requirement, but for now, let’s enjoy what we have. Be sure to support your local brewery, and be sure to send some love to Transplants Brewing. A copy of the updated protocol for Los Angeles County breweries, restaurants and wineries can be found at http://publichealth.lacounty.gov/media/coronavirus/docs/protocols/Reopening_Restaurants.pdf. Cheers!