The photos in this gallery were taken over the course of two days. On Tuesday we headed over to the Stone Company Store in Pasadena to check out the Enjoy By 08.16.14 and w00tstout 2.0 on tap before deciding how many bottles to buy. Unfortunately, the Enjoy By seems to fluctuate a lot lately but this batch is great. The w00tstout 2.0 was also worth bringing home. They had a couple Stone Brewing World Bistro & Gardens – Liberty Stations; The Sacred Druid Hot and Lil’ Miami Tart available that were quite fun. Between those and the stash we brought home it was well worth the drive. It has been a while since I have been to the Stone Company Store due in large part to the fact that my daughter moved out of Pasadena. It is always a good place to look for the new releases; especially if you want them on tap.

If you have never been, it is at the Metro Station on Raymond. They have a full tap room for pours and filling growlers; they sell kegs, bottles, t-shirts, mustard and anything else Stone Brewing makes. Their tap list has everything you might find at the brewery itself and it is about 70 miles closer than Escondido. It is a clean setup and if you want a wide variety of Stone brews on tap, this is where you want to be. Their 4 oz pours are less than $2.00. Stone Company Store is located at 220 S. Raymond Avenue in Pasadena, CA. They are open seven days a week from 11:00 AM until 9:00 PM.

The next day I was planning on going back to my son’s to check out his Glacier Summer Ale. That morning he said they wanted to take me to lunch for my birthday so it was decided that we would meet at Stone Brewing World Bistro & Gardens in Escondido. While there was a time that Stone Brewing Company was the only real game in town for me, things have changed and it had been probably three years since the last time I was there. I looked forward to experiencing it again. END_OF_DOCUMENT_TOKEN_TO_BE_REPLACED

Sunday July 14, Haven Gastropub in Pasadena, CA hosted the LA Beer Bloggers Summit #6. This was my second visit to one of these gatherings and I really enjoyed the opportunity to meet more of the people that are behind the scenes in promoting the craft beer scene in Southern California, and specifically Los Angeles and Orange counties. This was my third or fourth visit to Haven Gastropub, but my first couple of visits they were not really brewing yet. When I was there back in May they were just releasing their first batch of Simcoded American Pale Ale. Things have really changed in the last two months.

As our host for the event, Managing Partner and Beverage Director Wil Dee spoke for a while on the growth and mindset of the new Haven Collective, which includes their various restaurant locations and the brewery. He also discussed their future plans and how they chose their new Head Brewer, Brian Thorson. He then turned the floor over to Brian who proceeded to discuss the various beers he is currently brewing. When I was there in May they released the Simcoded Pale Ale; by yesterday they had added More Please, a Kölsch; Jimmy Hafen, their Hefeweizen; Orange Face (O Face), an American Amber / Red Ale; Performance Enhancing Drink (P.E.D.), an American Brown Ale; Disco Pants, a Black Lager and Double Hubble, a Double IPA. They also provided us a sample of their next IPA, Hop Sing. You can tell things are really picking up at Haven with the addition of Brian Thorson.

These photos are from the event at Haven Gastropub with a stop by the Stone Brewing Company Store which is right around the corner. They make some great mustard and it is too cheap to not make the stop since we were in the neighborhood. We had a great time networking with other beer bloggers and I look forward to their next summit. Haven Gastropub is located at 42 S. De Lacey Avenue in Old Pasadena, CA. They have good food and very fine craft beers. END_OF_DOCUMENT_TOKEN_TO_BE_REPLACED 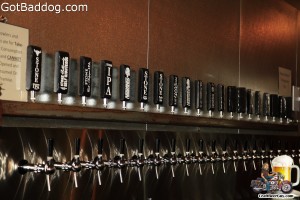 Wednesday was day three of the 8th Annual American Craft Beer Week (ACBW), and I continued my quest to visit as many Great American Beer Festival (GABF) gold medal winners from Southern California as possible. For day three we drove out to Pasadena to visit the Stone Brewing Company Store that opened the middle of last year. I have visited the location a couple times and I will admit that if I had an office job that required I commute, there would be nothing better that I can think of than to have something like the Stone Brewing store waiting for me at the end of my work day. Besides beers on tap, they offer growlers and bottles and extremely good prices. It is worth the trip.

Rated as one of the best brewers in the US and the world by two of the largest beer enthusiast websites, RateBeer and BeerAdvocate, I would be remiss if I did not include Stone Brewing in my quest for GABF award winning breweries from California. While I went to Pasadena yesterday, if you have an opportunity to visit their brewery in Escondido you should do it. Good food and great beer in a very scenic setting. It is appropriate for the entire family. 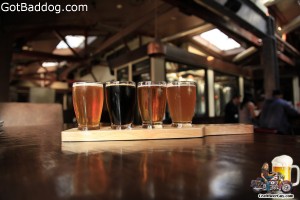 After sampling at Stone for a while, we went around the corner to Haven Gastropub and Brewing. I have been there before, but as I recall they were just starting to brew on location. I had forgotten about that, but knew I could find some award winning beers on their guest tap list. As it turns out, Gastropub Brewing has a new Head Brewer, Brian Thorson, an award winning brewer formerly with Drake’s Brewing and yesterday they released his new brew, so I included it on my flight. My flight consisted of Haven Simcoded American Pale Ale, Firestone Walker Velvet Merkin (2010 & 2011 GABF Gold medal), Eel River Acai Wheat, and The Bruery White Oak. While the beers from Haven, Eel River and The Bruery were not medal winners, the breweries and brewers have won numerous awards.

All my photos from day three of the 2013 American Craft Beer Week can be found on GotBaddog.com.