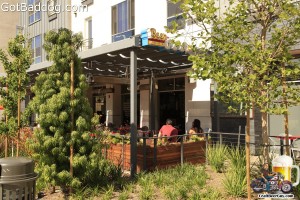 Tuesday was day two of the 8th Annual American Craft Beer Week (ACBW), and I continued my attempt to visit as many Great American Beer Fest (GABF) gold medal winning craft brewers from the Southern California area as possible. If I am able to cross paths with winners from other states in the process, that is fine with me.

If you read my story about day one of ACBW, you will recall that I had attempted to visit Beachwood BBQ & Brewing but discovered that there were closed on Mondays. Since I had a pretty busy morning, it was decided that I would go back there on Tuesday because not only have they won multiple awards, it was a safe bet that their guest tap list would have at least one medal winner among the selections. I would not be disappointed.

As you can figure out, I am not a stranger to Beachwood BBQ & Brewing; the only thing that keeps me from going there more often is the drive. I mentioned in my last article that I got the impression that the beertender at Pizza Port San Clemente was not really into craft beer, that it was just a job for him. I have never experienced that any time I have visited Beachwood; in fact, it has always been quite the opposite. Yesterday Thomas was working and you could tell that he enjoyed his work and was a fan of not only Beachwood Brewing’s beers, but craft beer in general. 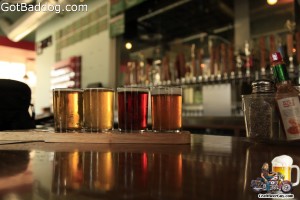 Beachwood BBQ & Brewing won a gold medal at the 2012 GABF with their Udder Love stout. Unfortunately that was not available, but they had three award winning beers available on their tap list, so I created a flight consisting of their Foam Top Cream Ale (2012 World Beer Cup Gold Medal), an El Verano Belgian Style Saison (2012 GABF Bronze Medal), Knucklehead Red American Red Ale (2012 San Diego International Beer Camp Bronze Medal) and The Falcon West Coast IPA (no awards, but delicious). To top it off, I finished with an AleSmith IPA (2011 GABF Silver Medal). It was a great set of champion beers to celebrate day two of the 8th Annual American Craft Beer Week. You can see all of the photos on www.GotBaddog.com

One Response to Day Two of American Craft Beer Week 2013