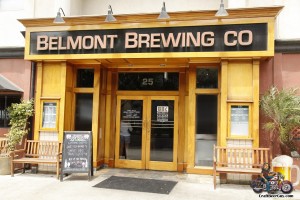 Belmont Brewing Company – All about the location

On Monday morning I had some business to do in Los Alamitos; as I was finishing up around lunch time and Tanya was hungry, I asked her to get on her Smartphone to find where I should take her while I finished up. When she suggested Belmont Brewing Company, a brewpub that was 15 minutes away, I remembered that I had tried a couple of their brews at a beer festival in the past but as we had never been there before and Beachwood was closed, why not? 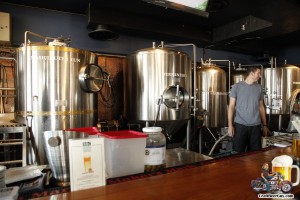 The first thing I noticed is that parking is close to impossible. Truth be told, I could not even tell you where the best place to legally park. I guess foot and bicycle traffic is the best for them. The next thing I noticed was that this place was literally on the beach! I mean, what brewpub can afford a piece of prime real estate like a Southern California beachfront? Not many that I know of; but Belmont Brewing Company has been at this location since 1990, property was a little cheaper back then. Okay, I don’t know if they own or lease, but I suspect they own the property.

When we entered, we were offered our choice of sitting inside or out on the extensive outdoor patio they have. I got the impression that the hostess was a little surprised when I said we wanted to sit at the bar. It was a little hazy that afternoon, so the view wasn’t that spectacular; and I wanted to get a little history of the place.

Belmont Brewing Company (BBC) has been around since 1990; which was around the same time that several brewpubs opened in the area; places like Manhattan Brewing Company, Redondo Beach Brewing Company and several others. I guess the primary difference is that BBC continued brewing beer instead of going the route of the aforementioned and turning into a gastropub. That being said, their head brewer has been there about 16 years so the recipes are pretty engrained. We ordered a flight of their house beers and were presented with their house favorite Strawberry Blonde, their Marathon blonde ale, Smash IPA, Long Beach Crude stout, Full Sail amber and their double dry hopped Pale Ale.

The presentation of the flight was a little odd as you must lift the glass from the tray to find out what you are drinking. On top of that, when I asked our server where they recommended we begin, he started to say something, and then opted out with, “It doesn’t really matter.” I decided to start with the Strawberry Blonde because I figured it would be the lightest. It may have been one of lowest ABV, but it really was one of the tastiest. We kind of lucked out with the DDH Pale Ale as it is not typically served on their flights, but they were out of the Pale Ale so they substituted with the DDH version. 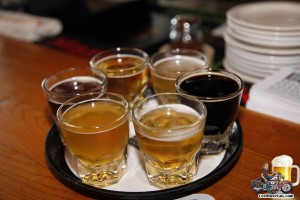 After conversing with our server and their assistant brewer, I discovered that Belmont’s typical customer probably isn’t coming for the craft beer as much as they do for the wine, cocktails and the view. The Strawberry Blonde is their best seller because it is so approachable and “women really like it.” Apparently the first Strawberry Blonde was made to cover up an error on the Marathon Blonde; strawberry flavoring was added and it was an immediate hit.

Belmont Brewing Company is located at 25 39th Place in Long Beach and is open every day until midnight. They are doing some bottling and a few of their brews can be found at local bottleshops. I don’t know that I would exactly classify BBC as a craft beer destination, but if you are in Long Beach and you want to drink a beer while enjoying a great view, Belmont Brewing Company should satisfy that desire with ease. Cheers!